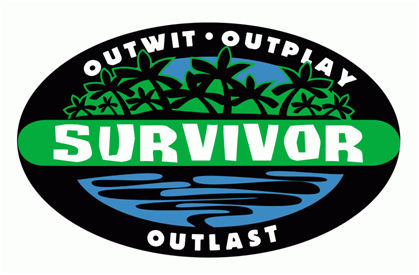 This week, during Literacy and Social Studies periods, our class participated in an island survivor simulation. The exercise was designed to consolidate learning in Social Studies, while stretching students’ ability to work collaboratively in assigned groups and providing them with an opportunity to engage in role play.

Prior to undertaking this project, students in Grade 4 worked in pairs or individually, to research one of Canada’s physical regions. Students in Grade 5 completed an inquiry project exploring the roles of various levels of government in addressing social and environmental issues. Students used this prior knowledge to inform their "island survival plans." Each student also created a character he/she wished to play during our island survivor simulation.

This is the basic outline of the project (Click on any photo to enlarge it.) 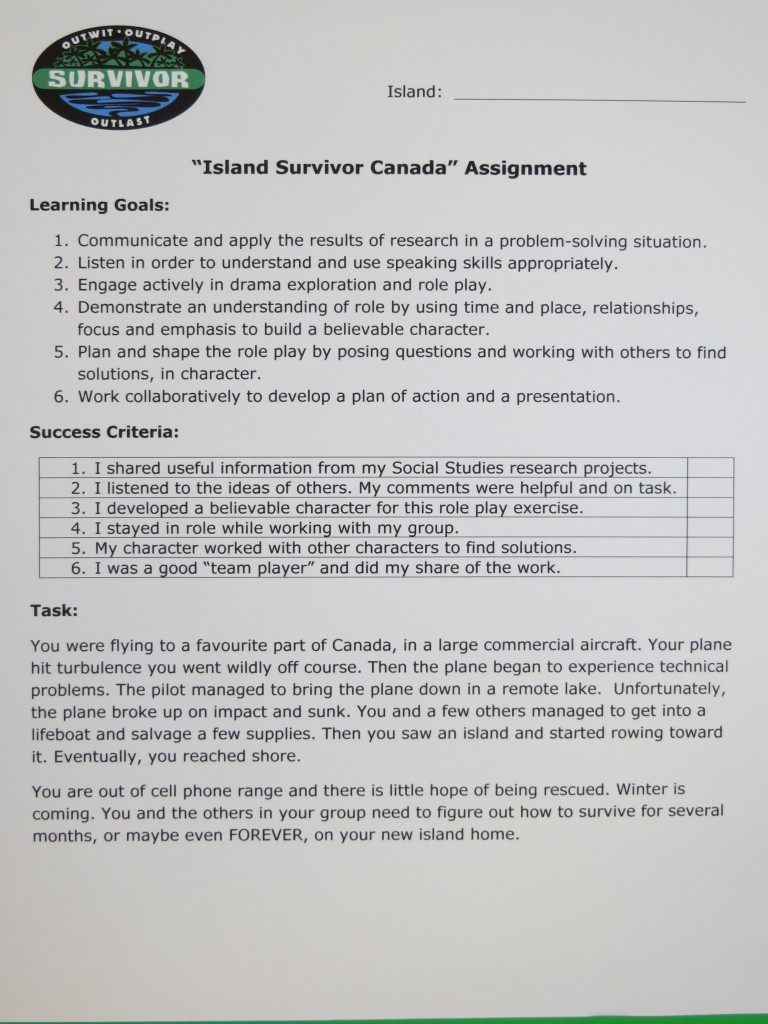 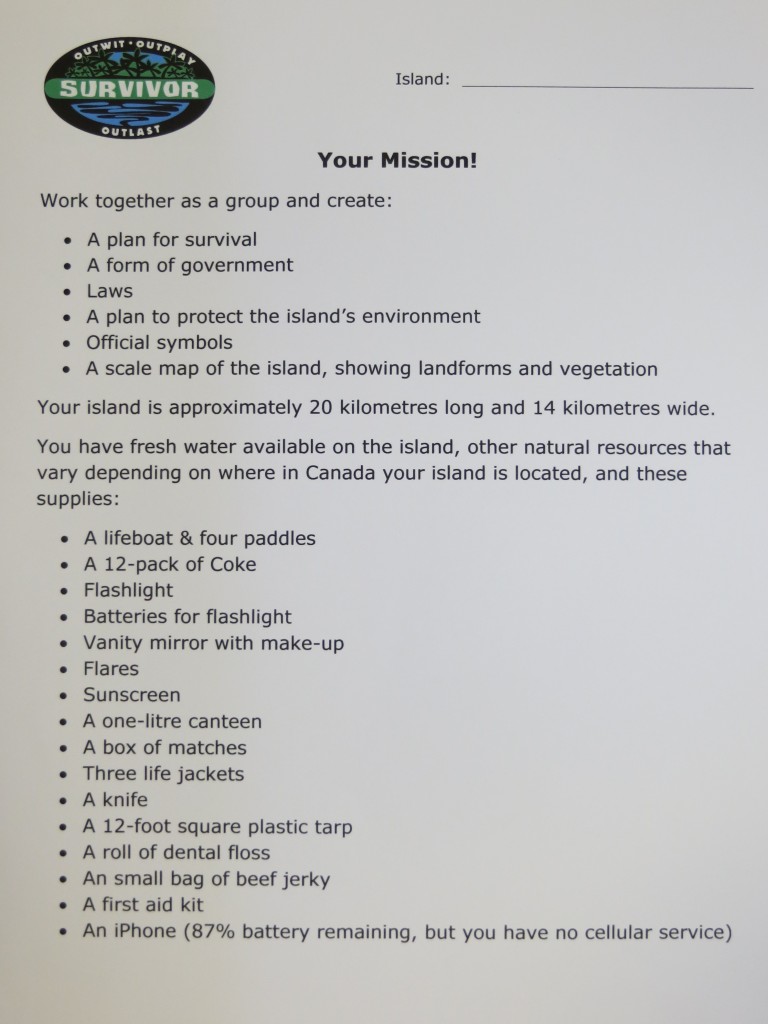 On Monday, we discussed the terms "collaboration," "compromise" and "consensus," as a class. Students were told that the goal was to reach consensus within their small group, when developing their survival plans. 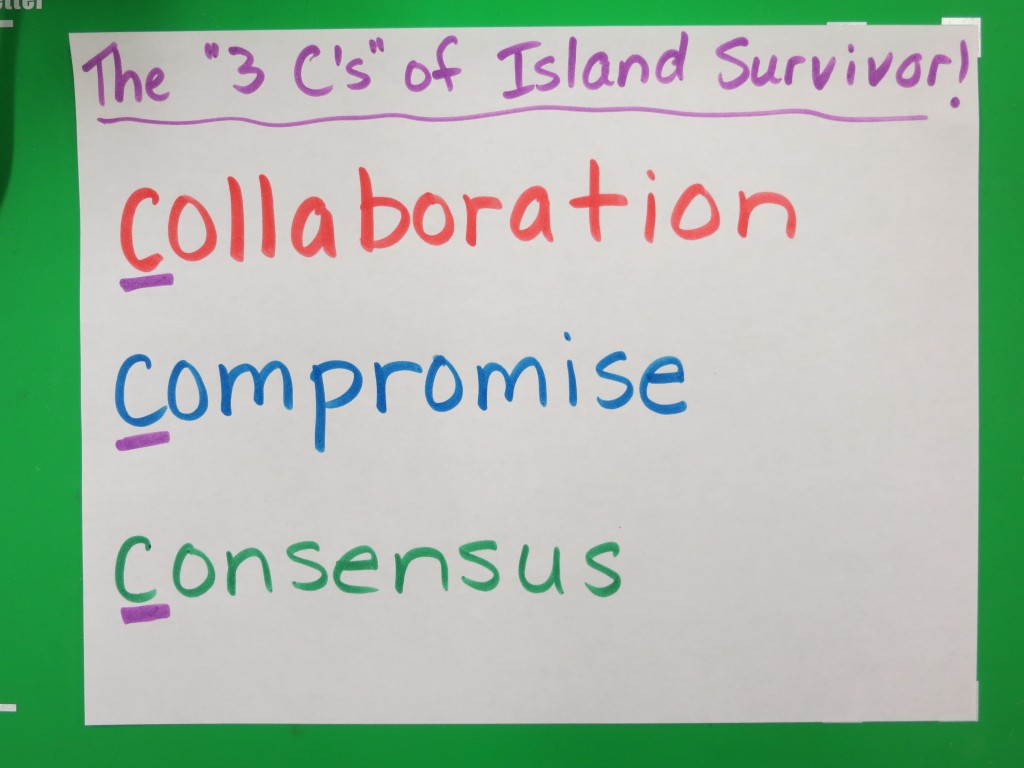 Students were then assigned to groups and given name tags, information packages and survival plan templates. 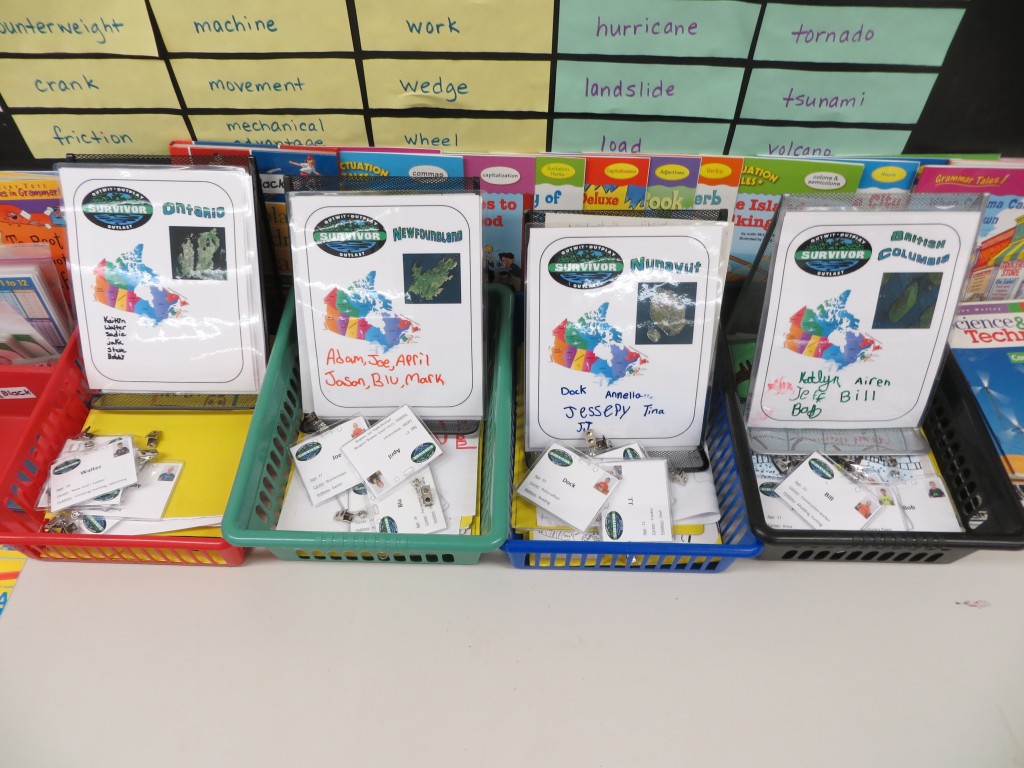 For the purpose of the island survivor exercise, Grade 4 students "crash landed" in the region of Canada that they studied. After the class was divided into their survivor groups, the Grade 4 students taught their Grade 5 island-mates about the region in which they found themselves stranded.

Then, within their small groups, students introduced their characters to each other and began brainstorming a list of all the things they might be able to do with the items that were salvaged from the plane. Two students that participated in this exercise last year were given the task of researching search and rescue methodologies. They also took on a role as small group facilitators.

On Tuesday, groups continued their work exploring potential uses for the items salvaged from the plane and began to develop their survival plans.

On Wednesday, one or two members of each group began work on a land use map of their island, while other group members refined their survival plans. Students responsible for search and rescue plotted search grids on regional maps that included the locations of our islands. 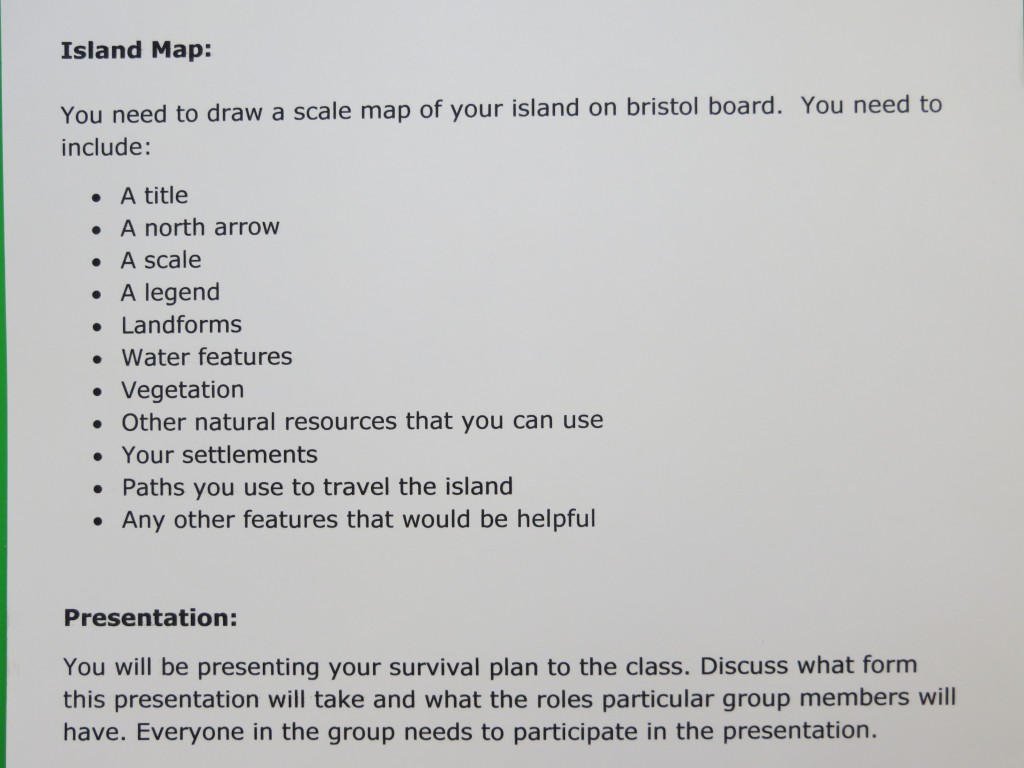 On Thursday morning, groups were told that, against all odds, they had been found!  They were told they would be invited to participate in a press conference explaining how they had survived their island ordeal. The students that had researched search and rescue methodologies prepared to role play a presentation about how the survivors had been found.

On Thursday afternoon, Search and Rescue and the group that had been stranded on an island in Ontario attended their press conferences and made presentations. The rest of the class acted as members of the press gallery, listening to information, posing questions and completing presentation feedback forms. 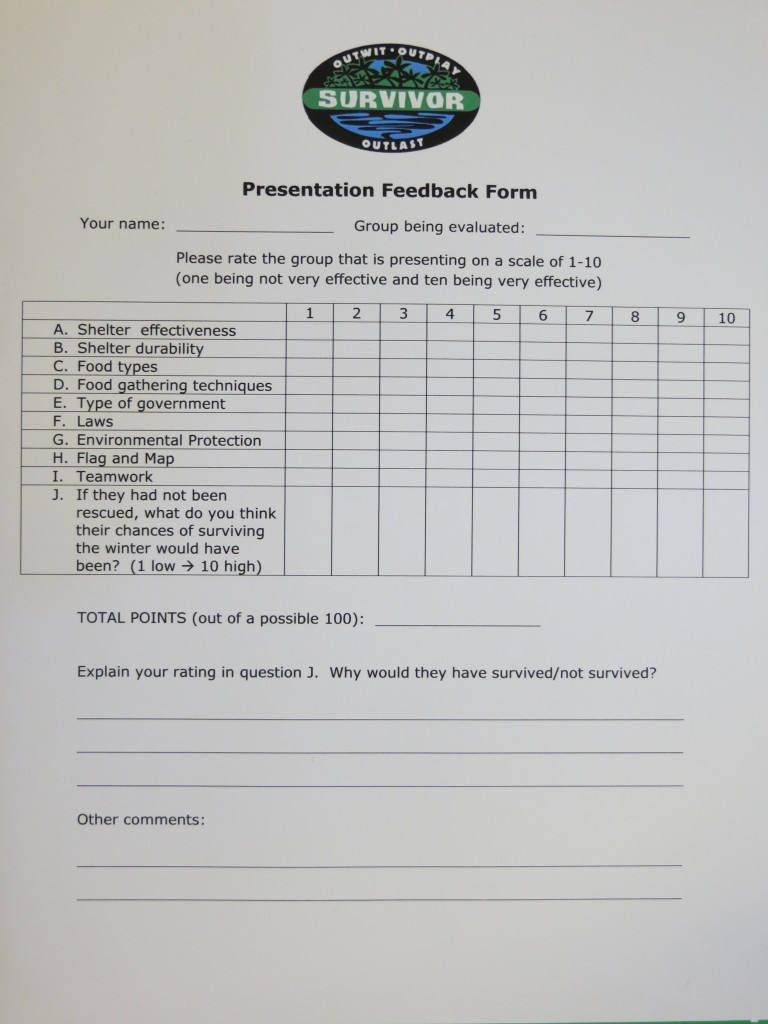 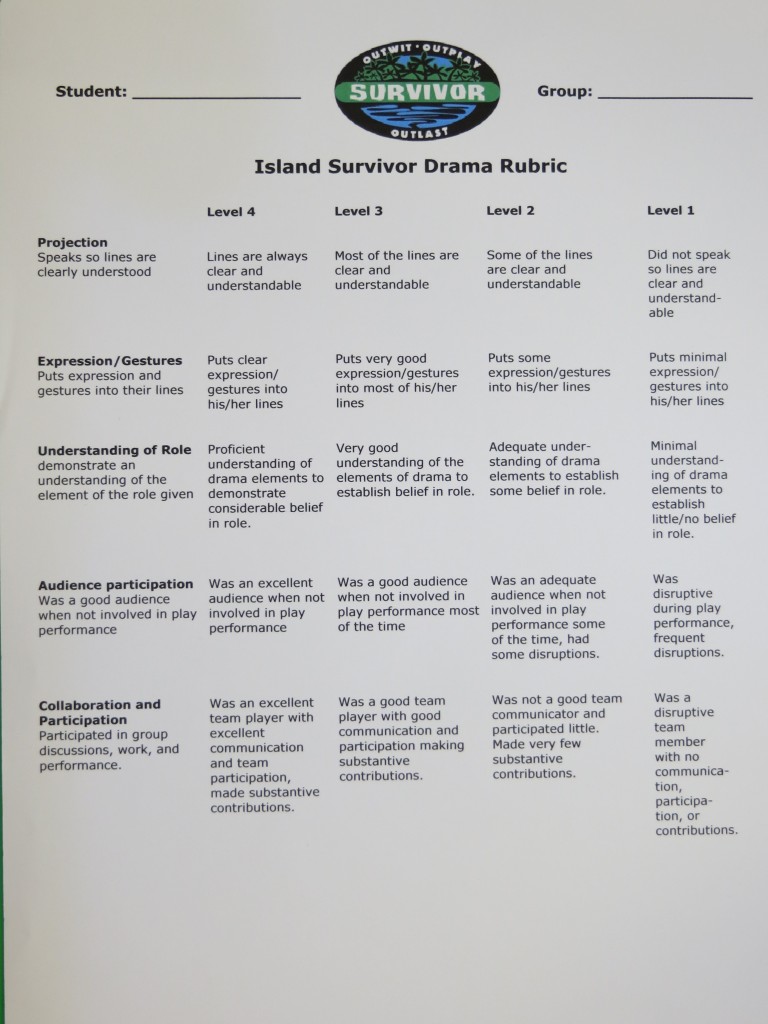 On Friday, we held press conferences for the survivors that crash landed in Newfoundland:

At the end of the process,  students completed peer evaluation forms reflecting upon their group work skills and the skills employed by the other members of their small group. 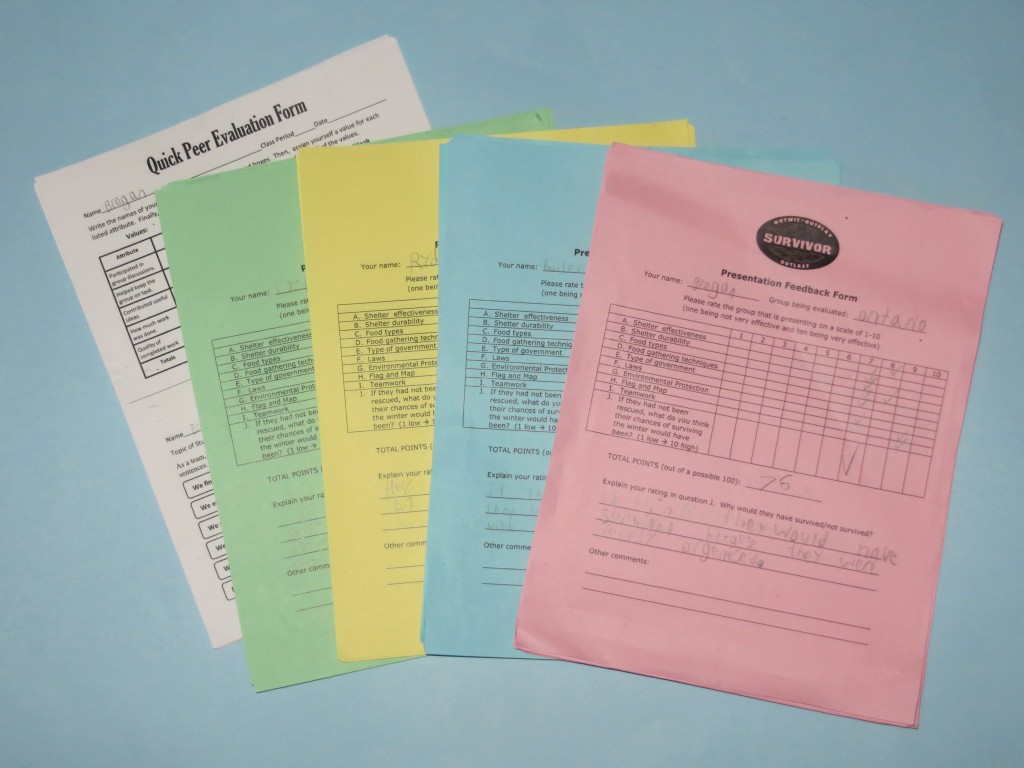 THE RESULTS ARE IN!

These are the scores the class gave each group's overall survival plan, based on their performance at the press conference:

The class was also asked to rate the odds of each group surviving a winter in the wilderness, based on the survival plans they presented. These are the class' estimates:

Congratulations to the survivors who crash landed near Shakespeare Island, Lake Nipigon, northeast of Thunder Bay, Ontario! You are the winners of Island Survivor 2014!!

Island Survivor was a thoroughly enjoyable experience for most students in the class; a frustrating one for a few. While groups were meeting to brainstorm ideas and achieve consensus about their survival plans, Miss Carson and Mrs. Black circulated. They stepped in and facilitated whenever personality clashes or inexperience with consensus-building created an impasse. They hope the one-on-one and small group coaching that transpired during this activity will provide students with some new tools and strategies they can employ next time they are collaborating with others on a project.